When I perform research and I work with data, I follow a simple and natural data analysis workflow which I like to see as divided into three main phases. The three phases are quite common among all data scientists/researchers although everyone has its own version. Here is mine: 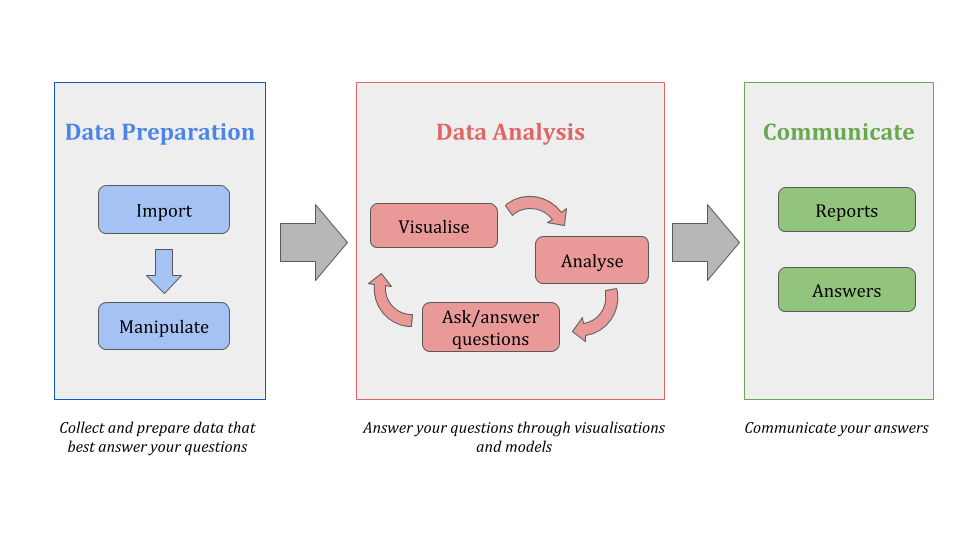 The first thing to do is to import your data and get it in the right shape and format. Both parts may take a fair bit of time.

Importing data may be very easy, as you have the data in some file stored somewhere on your pc, as either a flat file or some specific common data format for data collectors such as STATA, SAS, etc. But the data import process may be complicated by the fact that you may have to retrive the data by connecting to a database or by accessing an API.

When it comes to R there is a number of packages useful for importing different file formats. Here is a small ist of the main ones, some of which are part of the tidyverse and some not:

If the data is not organised as above, I suggest you transform it to be so.

Moreover, data may not be all on the same files, so you may have to deal with different tables hence make sure you can match information on such tables. Or you may have to collect specific variables from here and there and create the dataset you will be working with.

Note that this part may be fairly time consuming, but it is extremely important. This will be the base of your analysis and as many say “grabase in, garbage out”, so one should pay lots of attention to this part.

Again, when it comes to R there is a number of packages that may be used. I mainly use the following:

Data Analysis is the fun part! Here is where your analytical skills come out the most.

First you need to understand the data by for instance printing tables and visualising it. This part is important and may go into your final report and may already answer a number of questions.

In R I mainly use the packages ggplot2, for general data visualisation and ggmap for plotting maps.

Once data has been vizualized and understood, it is time to model the data in order to complete your analysis and answer more complicated questions that involve the interaction between more variables. The model may be simple comparison between the means of two or more groups or may be more sophisticated model.

According to which model I am applying, I may use different packages. It is hard to give a list of the main ones because the models’ universe is very very variagate!

Once you have finished the analysis you need to communicate what you have learned, to others in order to answer a research question. You may do so by builind a static or an interactive report, according to your needs. It is important to include plots and also explanation of what has been done.

I like to create reports straight from R, that allows to include code in between text. For static reports, I use Rmarkdown package for both slides and reports, html outputs and pdf outputs; while for interactive reports, I use Shinypackage.